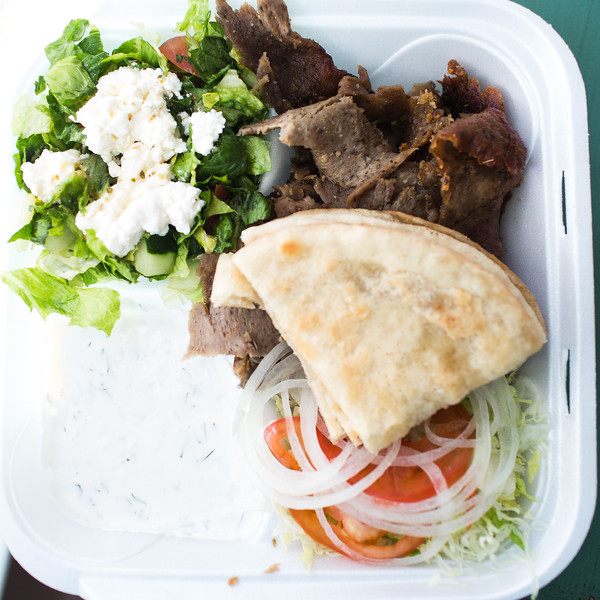 Hixson seems to be the poor stepchild when it comes to restaurants in Chattanooga.  It seems like most of the restaurants are either downtown or near Hamilton Place.  It’s slowly changing though and I hope that it continues to grow.  We happened to be driving down Hixson Pike one day and saw 2 Crazy Greeks little trailer/stand.  They are basically a food stand set up in a parking lot near 153.  We made a mental note that the next time I needed my husband to pick up take out on the way home from work, this would be our next choice.

When the day came, my husband called me to say that he was leaving and that I should call in our order.  We both wanted the Gyro platter, which is $12 and comes with your choice of fries or a salad.  We both chose the beef and lamb gyro with a greek salad.  What was funny was that when I called the woman asked me to hold for a moment.  I could hear her yelling at someone.  Then she took my order.  When my husband picked up the order, he said they were still yelling!  I love it!

The Greek salad was good.  A light lemon dressing, feta, cucumbers and tomatoes.   The description said that it came with olives, but neither of ours had any.  I know that it was probably scooped out of a big batch and we just happened to not get any.  The beef and lamb meat were both very flavorful.   The tzatziki  sauce was thin, but flavorful.  My favorite part of the meal were the pitas!  They were light and delicious.   They are cut into quarters, so you have to sort of make gyro pita bites – you can’t roll them up.

All in all, we were pleased, it wasn’t the best that I’ve had and it certainly wasn’t the worst.   It’s another option for eating in Hixson.