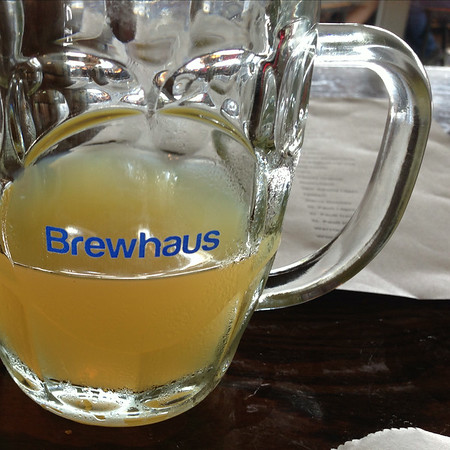 On a warm Saturday afternoon in June we decided to visit  Brewhaus by Coolidge Park.   We had seen people out on the balcony many times while we were at the park, but had never stopped in to eat there.  Coming from St. Louis, which had a huge Octoberfest celebration, I have a long standing love of German food.  Brewhaus markets itself as a German American Gastro Pub.

We had planned on sitting outside, but once we climbed the stairs we realized that the only places that were left were in the sun.  Though we were tempted, we went inside and chose a table.  It turns out it was probably a good move, later we saw three girls sit outside, they lasted about 15 minutes before moving inside.  Inside is  small, with a few tables and seating at the bar.  We sat at a tall table where we could also see out the big patio window to the outside balcony, so it was almost like we were outside, only much cooler.

We were immediately handed a beir menu and a food menu.  The waiter was very friendly and chatted with us about the beers.  I like that the alcohol content was included on the menu (I am a lightweight when it comes to beer – it makes me very sleepy – and the hoppy beers that I love, even more so).   I had a Red Brick Hop Circle for my first – and it was nice and hoppy.  Later I had a Stiegle Grapefruit Radler – it was delicious, light and tart. 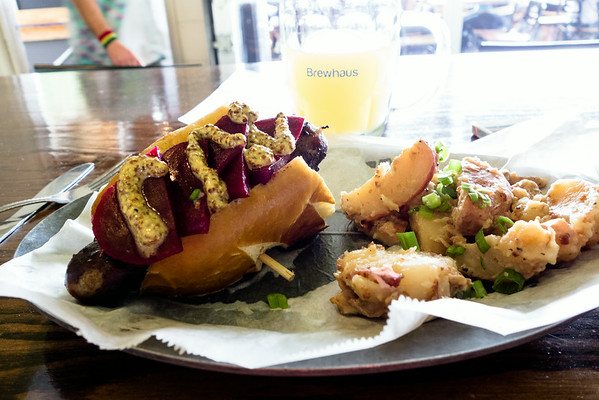 I was actually planning on eating the beets separately, so I had to scrape the mustard off of them back onto the brat.  The brat was grilled perfectly with crispy skin and juicy meaty inside.  The kraut and mustard made a good topping and the beets were nice.  I didn’t really like the potato salad.  I thought it was too mustardy. 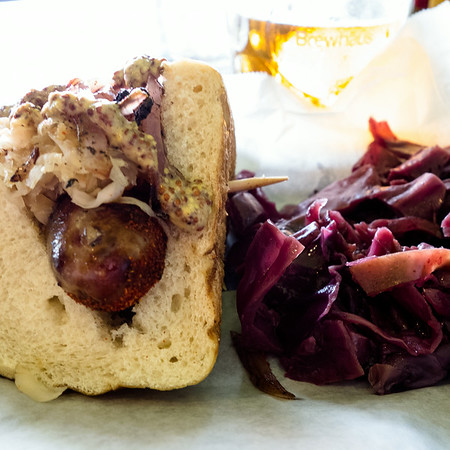 They actually messed up hubs order and put the cabbage on the side.  But it was a lucky mistake, because the cabbage was wonderful!  When we go back, I am definitely getting it instead of the potato salad. His spicy brat was quite spicy, not for the faint-of-heart.

We will definitely be back, especially once the weather is a little cooler so we can sit outside.  We saw someone having the Brewhaus sampler (an appetizer) that features brat sliders, kraut balls and a pretzel – which is next on out list to try!

The Brewhaus is located at 224 Frazier Ave, Chattanooga TN.