A review of The Block a restaurant in the Central West End area of St. Louis, Missouri.

Choosing where to eat in St. Louis during our recent trip was accomplished mainly by reading reviews on line and finding articles about the best places to eat.  The Block showed up on a lot of lists and since it’s Central West End location was pretty close to where we were staying, it was an obvious choice.  In addition, it was one of the few restaurants on our list that were open on a Monday evening.

We arrived at 5:30 on a Monday and were seated immediately in the empty restaurant.  There was a table filled in the outside area and a few people at the bar, but the main restaurant was empty.  There are no booths, other than a half booth at the far wall.  We sat at a table in the middle of restaurant.

After haven eaten somewhat lightly over the weekend, we were in the mood for a burger.  We both went for  The Block Burger 8oz grass fed beef, farmhouse white cheddar…fries & house pickles for $11.  My husband added a fried egg for $3 more.

As you can see in the photo, my burger was quite a bit smaller than my bun.  However it was a perfectly cooked medium, with plenty of juice, and the bun was nicely toasted and soft.  The thin fries were excellent.  They were crispy and perfectly seasoned.  The housemade pickles included cucumbers and red onions and again they were very good and subtle. 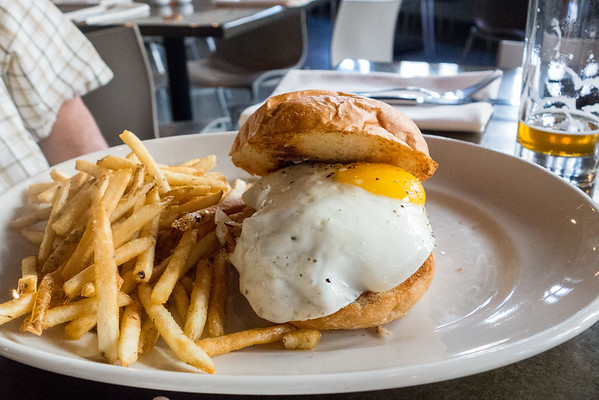 My husband’s burger was also excellent.  The fried egg was cooked perfectly.  When we first walked in, we (or at least I did) noticed the homemade ice cream mentioned on the big menu board on the wall.  I faced that menu the whole dinner and by the time dinner was over, there was no doubt that I was getting some ice cream.

The strawberry lemon thyme ice cream was amazing!  It was two generous scoops and served with a biscotti.

We loved the meal.  After looking online though, it appears that there is a very interesting happy hour menu – with a selection of starters and craft cocktails for $5.  We weren’t told anything about this, so I’m guessing you have to sit in the bar to be made aware of it.  I would have definitely tried a cocktail or two if I had been given the chance.