The Hai Karate is a rum based cocktail loaded with lots of refreshing citrus.  You’re going to love it!

I am fascinated by America’s fascination with the tiki culture in the 1950’s and 60’s.  One of the things I acquired from my grandmother was several boxes of her barware.  It was loaded with all sorts of tiki items!  These mugs were from The Mainlander in St. Louis, Missouri.   It was difficult to find out information about The Mainlander, but apparently it was Tiki club in Clayton Missouri during the late 1960’s.   The green tiki stir sticks though they aren’t marked, probably came from Trader Vic’s. 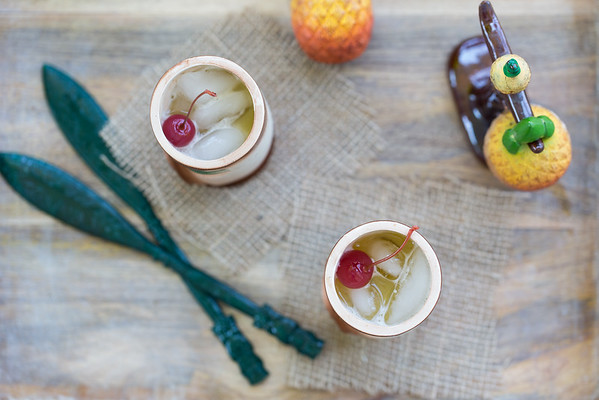 According to Wikipedia, the Tiki culture was introduced to the United States in the 1930’s with the opening of Don the Beachcomber, a Polynesian-themed restaurant in Hollywood, CA.  A few years after that, Victor Bergeron opened up Trader Vic’s in Oakland and then the restaurants spread worldwide. 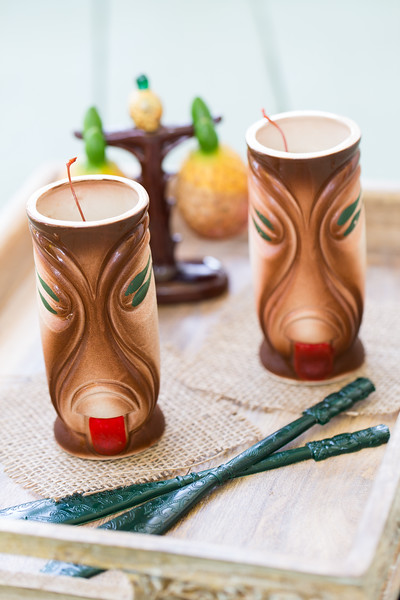 It was after World War II though that the obsession with all things tiki really took over.  Servicemen came home with stories of the South Pacific.  This, coupled with the musical South Pacific and Hawaii becoming a state in 1959 all fueled the Tiki fire!

With the warm weather we’ve been having, I was in the mood for a little Tiki inspiration myself.  While a Mai Tai is always appreciated, I looked to venture out a little more.  Doing a little web searching, led me to The Hai Karate at Serious Eats.  Featuring rum, lime juice, orange juice, pineapple juice, maple syrup and Angostura Bitters – I was assured a citrusy refreshing cocktail.  I had all of these things available, so I was good to go.  Did I tell you my freezing tip for cocktails?  I buy big bottles of pineapple juice and freeze it in plastic baggies filled with one cup.  I freeze them flat so they store easily in my freezer and whenever a recipe calls for some pineapple juice, I am all set!  This drink was wonderfully refreshing, nice and citrusy!

This Hai Karate is a wonderful rum based cocktail to get your Tiki on!

and Tiki Cocktail Stirrers – Box of 250